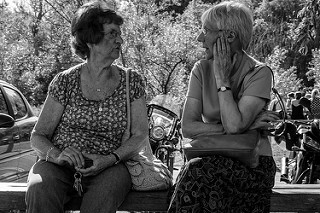 Communication is very important for fostering peace and resolving conflicts. Just talking things over, not necessarily on the points of conflict or difference, prepares an amicable environment conducive for further friendly relations. The diffusion of air from both sides brings about mixing and a uniformity of thought. Contrary to general perception, it does not rob us of our views, thoughts, culture; instead it makes us more tolerant towards the view of the other side. Who knows, maybe that other side’s thoughts may help us examine our own concepts and aid us in seeing things better. Thus, the advocates of peaceful resolution of issues/conflicts generally urge not to withdraw any sports tournament between countries, not to discourage religious and general tourism, not to ban movies or deny visas to artists, and not to cancel formal or informal talks. There would always be forces whose only aim is to create chaos, and who feed and survive on conflicts; it is to counter these forces that the military are required. However, long-lasting and enduring peace is possible only through communication. Of course, both sides must be committed to achieve that aim.

Though the need for active communication is generally acknowledged, it is surprising how less it is encouraged or implemented beyond the formal lip service. Such is the case not only at international level between two countries or group of countries, or between two communities, but one also sees the phenomenon happening at the individual level. People are getting more and more uncomfortable in any type of company. A new type of mindset is developing that takes solace in itself, and excludes anything and everything that lies outside its little sphere. Streets are empty, and the playgrounds are mostly used for individual sports and exercises. Even while jogging, earphones are plugged into the ears conveying the ‘do-not-disturb’ message, thus restricting any possible attempt of an occasional greeting from a passer-by, and also of making new contacts. The social fabric has completely collapsed. People no longer sit together at tea-shops, reading rooms, parks, in front of radio or TV sets. They prefer to be alone. Yes, they make acquaintances, but out of requirement — ‘who knows, someday we may need them’. This living in isolation, like on an uninhabited island, cut-off from all society or civilization, is a dangerous development.

1 thought on “On Communication”

Scientists tell us that life on Earth was possible only because it is at an 'optimum' distance from the Sun. This energy -- a combination of light and heat -- was behind the creation and sustenance of all flora and fauna on Earth. But it did not stop there. In my personal opinion, light played the most crucial part in our scientific quest and discoveries. Optics is the foundation of human civilisation. Only by light are we able to see the natural world and its treasures. We looked up at the source of daylight, viz., the Sun, and the innumerable stars dotting the night sky. We were curious, and tried to make sense of it all and have an explanation of it -- first from mythological stories, then by logic and analysis. Who are we, where did we come from, who created these celestial and terrestrial objects? And what does it all mean?
And here is the same arrangement as before with the light source placed in a different direction.
My new artwork: 'Bowl In Bowl', Pencil On Paper, Realism, Still Life.
'Bowl On Bowl', Pencil On Paper, Realism, Still Life.
'Bowl', Pencil On Paper, Realism, Still Life. Here light source is placed at a different angle.
'Bowl', Pencil On Paper.