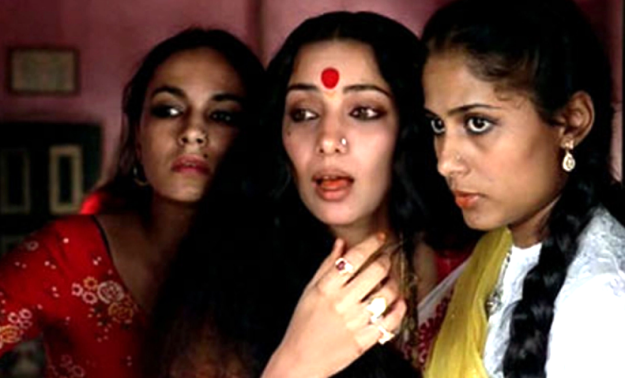 Shabana Azmi and Smita Patil with Soni Razdan in a scene from Mandi (1983), a yet another Shyam Benegal masterpiece. Photo source: TheQuint.

I will continue with my discussion on film appreciation based on onscreen depiction of conflicts. In the previous two parts of this series, I highlighted the different styles employed by actors to portray the characters they were playing. In the second part, I discussed geometry, inclination and orientation in a scene. I also mentioned importance of the 1/3 rule and the leading lines. Hope you remember those details. Otherwise it is a good idea to brush up your memory by revisiting those articles because discussion in this article and all forthcoming articles depends heavily on the concepts outlined in previous articles.

Shabana Azmi and Smita Patil are two stars of Indian cinema, which this country would forever be proud of. They loved this art, they lived for this art. You may pick up any movie or any scene at random, and you would be stunned and touched by how much effort and sincerity these actresses pour into their roles. Honestly speaking, these two are the role models for every actor and actress to emulate — not just for their talent and skill, but also for their dedication, commitment and sincerity.

People are divided over who is the better actress of the two. Perhaps it is understandable because we human beings love to divide and compare. First we divide the world into countries, and then compare between America and Russia, India and Pakistan; we divide a country into states and then compare between Kerala and Bengal. But as I quoted in the first part of this series, such comparison should be discouraged because it poses an obstacle for a deep and thorough appreciation of any artwork. I think, in this case, people compare Shabana Azmi and Smita Patil simply out of habit, they cannot help it. Otherwise, deep in their hearts, they do realise and appreciate that this can never be done, this ought never be done.

But yes, the rivalry, or more appropriately, the competition of these two actresses is all well known. However, I would rather call it as healthy competition — the two did not indulge in cheap politics or dirty games to win the upper hand, instead tried to excel themselves and with that tried to surpass the other person. The result is a masterpiece, one after other, which audience and viewers devour with great delight. There are far too many movies in which either of the two actresses have acted, yet others where both had roles, though supporting roles, e.g., Mandi (1983). The number of movies where they confronted each other is very small. To pursue this discussion I have selected one scene from the final moments of the movie Arth (1982).

Again, if you pursue the dialogues closely, you would have a fairly good idea of the movie storyline. Still, just to acquaint you with Smita Patil’s state of mind, I have chosen to start the scene a little earlier than the actual confrontation. In the beginning moments of this clip, Dina Pathak tells Shabana Azmi about Smita Patil’s predicament and requests her earnestly to pay her a visit.

Now let us begin our discussion with looking for details. The light arrangement in the room on one side accentuates the intense expressions on Smita’s face, the design of sofa and cushions, and on the other hand, lends a smooth texture to Shabana’s face, giving it even more innocent and calm appearance. There is no background music or any other sound, except in the first and final few seconds, so that even Smita’s whispers reverberate through a seemingly empty room. The two actresses look straight into each other’s eyes throughout the scene, again except for a few seconds towards the end of the scene, indicating a direct confrontation. This is unlike other scenes we had discussed earlier.

Shabana is positioned in such a way that she has her back towards the audience for the most part, especially when Smita is speaking out her monologue. This gives an appearance as if Smita is performing on stage, we the audience are sitting in back rows and Shabana in the front row. The result depends on how you take it — either you may imagine Shabana to be one among the audience, or you may imagine yourself sitting there on the plot beside Shabana and looking at Smita. Though she is the protagonist in this movie, in this particular scene Shabana does not have much to say except being an audience to Smita. Throughout the scene, she has a very calm and quiet expression on her face — she has fought a long battle, and now wants all that to end — the sooner the better. She has in fact won her battle, and commands full sympathy (if I may be allowed to use this inappropriate word) and support of the audience for her cause. Definitely she has much against several others, most importantly against Kulbhushan Kharbanda and Smita Patil. Yet, she chooses not to carry the burden of the past into her future, instead decides to dump it all there itself and make a new beginning. She could have done without coming to Smita, but then decides to pay her a visit, not out of courtesy, instead just to obey Dina Pathak’s sincere request.

Shabana has a lamb-like innocent and quiet expression on her face as if she is telling Smita about the futility of her guilty conscience, inner conflicts and turmoil. ‘Nothing like that, everything OK. Cool.’ seems to be her attitude throughout the conversation. Another aspect presents itself when Shabana is seated facing Smita. Several times Smita tends to hold a position at a lower level than Shabana, so that the latter is looking down at her. This makes Shabana’s eyelids to be half-open or half-closed, giving her a resemblance to Lord Buddha. You know this well if you have seen any Hindu art, especially those depicting Lord Siva or Lord Buddha. Half-closed eyes are used to depict mercy, compassion, calmness.

Smita’s performance is the prime focus of this scene, and fortunately I do not have anything to write about her. The intensity of her acting is reflected both in the various modulations in her voice as well as the expressions on her face. However, I do want to draw your attention to two interesting features in Smita’s style. She opens the scene like a queen, then storms aggressively against Shabana, who she accuses of ruining her peace of mind. In fact, it is her own guilty conscience which is playing havoc on her. Anyway, she shouts and rebukes Shabana, who in turn silently takes everything that Smita throws at her. But all the same, deep inside, Smita does realise that her present predicament has nothing to do with Shabana, and is in fact of her own making.  Then she starts talking to Shabana on a more equal level. This doesn’t last long, and she rises and continues her tirade against Shabana, followed by another spell of apologies. In summary, there are three episodes — when Smita is in dominating position, when Smita is on equal terms, and when Smita has surrendered and is seeking forgiveness. All these three frames are depicted easily by relative levels of the two actors. As throughout the scene Shabana is sitting on the sofa, this is accomplished by Smita standing in front of her, sitting beside her, and sitting down on floor in front of her, respectively.

Another feature of Smita’s style is her movements forward and backward. Physicists can’t help thinking of such movements in terms of Doppler effect! In drama, it is not so complicated. Moving forward or backward means what it is — moving forward or backward! You move forward, up close, when you are aggressive, and want to attack the other person, either physically or verbally. You move backwards, when you are in a defensive position and are retreating from the combat zone. Note that this is separate from the usual practice in theatre where actors usually keep moving left to right and back, all the time facing the audience, in order to maintain the flow of the act. Unlike movies, a scene looks frozen or rather petrified on stage if the actors keep standing at one place and speak out their dialogues.

This much for today. Do join me next week as I bring to you the next part of this series on clash of legends.

To have a look at other articles in the Clash Of The Legends series, click here.

3 thoughts on “When Shabana Azmi And Smita Patil Share Screen Space, The Result Is Sheer Magic!”