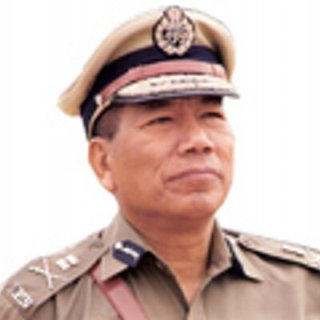 Browsing through page after page, one advertisement caught my eye : without resorting to any image or eye-catching graphics, a message was written in blue colour on white background : ‘Sangliana for President’. I scorned — “Huh, few days back, you wrote ‘Advani for Prime Minister’! Now that it is certain that Modi would be the prime-ministerial candidate from BJP, you have taken up this new campaign. King makers, eh? Now who is this Sangliana? Whoever!” And I continued with my browsing, the advertisement kept showing up with due perseverance, perhaps hoping that someday I would show mercy and pay attention to it. Finally, I gave in. I opened Google, and typed this name just out of curiosity. The result on right panel showed photograph of a man, possibly hailing from Mizoram, with a broad smile. The card read – ‘political figure’. What is so special? I opened Wikipedia and the words ”Deputy Commissioner of Police (Traffic), Bangalore City . . . retired as Director General of Police and Inspector General of Prisons. . .” caught my eye. Something turned inside my brain, but was not within grasp. I turned to Google images, and suddenly several memories came up from past, which I had nearly forgotten. Million memories. Sangliana . . .

I had gone to Dehradun with my elder sister, it being my first visit to that beautiful city. She was guiding me to various important places and markets in the city, and finally we found ourselves in Paltan Bazaar. It is a special market open only on Sundays, and is more of a bargain market. Things get cheaper depending on how long can you bargain, given your limited stamina and energy. Putting shops on pavements is not allowed, of course. As we were strolling along the market, we heard siren from a police jeep speeding into the market. A chaos started, and all the shopkeepers started collecting their items and began to run so as not to be fined or harassed. One shopkeeper could not move, either because he came to know about the raid very late, or perhaps his items were large in number. Jeep stopped in front of him, a demon-like inspector came out of it, and in a loud voice asked the shop-keeper, “I want a 1 meter cloth for shirt!” (Actually, he had asked for something else; I am just being modest.)

This is nothing unusual. In fact, the motivation for joining police services, as any other government service, are — house, servants, vehicle. Using official resources for personal use is so common that we take it for granted. Police services have gathered reputation for several other practices also. Some time back, one Senior Superintendent of Police made a surprise visit to a police station and found sentries missing, and driver sleeping in jeep. He couldn’t wake up the driver, so got inside the vehicle and rode for three hours in the city. Next day, the driver was dismissed, and action was taken against the station in-charge [8]. You have also read innumerable cases of complainants further harassed at police stations where they had gone to lodge FIRs. Every other day we see crowded roads and traffic jams, while the traffic policeman on duty stood in a corner chatting with his pals. Bribery and favourtism are so common, that we seldom prefer lodging any complaint, unless compelled to. That means, when your identity card or vehicle is stolen, you have to complain to the police and keep the receipt with you, lest you be in trouble when those items are misused. At the same time, we are convinced that they would never be recovered. Innocent people are next in line after complainants. Some crime has been committed, and the culprit has to be caught, so someone has to be produced. Often this practice is used by people, who have personal contacts inside police services, to seek revenge against their opponents. In fact, if we start narrating our personal experiences and those of our acquaintances, the resulting document would become even larger in volume than Wikipedia. Swami Vivekananda used to say — ‘If you want to know the character of people, look at their small gestures and actions. Anyone can act as a hero when in limelight. But a person of character is judged by small deeds’. Well then, you need not believe me, forget everything that I have said. Just go and meet any auto driver, vegetable seller, daily wager about their experiences and opinion of police officers and constables, and tell me what you learn from them.

You have already seen the picture where a policeman beat up an elderly person and broke his typewriter [6]. You have also watched the video where two policemen were shown fighting with each other over sharing a bribe taken from a street vendor, or that one where one cop fought with a home guard over traffic jam [9]. These are not stray incidents; instead, people doing outdoor jobs or those who have to move out as part of their job (in contrast to us, who spend nearly whole of our day in the security of four walls and a closed door) would tell you that these represent just a tip of the iceberg. We as citizens feel helpless and insecure whenever we read or hear news of such incidents. After all, we are dependent on the police force for security against physical attack and also smooth functioning of society. Perhaps in the end, the welfare and safety of an individual depends on the individual only, and that is one of the reasons why I strongly recommend my friends to teach their children martial arts and self-defence.

Several reasons are given — pressure, poor work environment, harsh conditions, shortage of personnel, inadequate weapons and bullet-proof jackets, insufficient salary and facilities. Nearly always they have to work under two-sided pressure — one from the public and media complaining them of not acting swiftly and strictly; other from ‘higher up’ directing them not to take action against ‘certain’ people. Once we consider these factors, our anger against them reduces a bit. Very plausible reasons. Police personnel have to be tough, indeed very very tough. However, several police officials who are upright and maintain high standards and character are also a part of this same environment. Having a strong character is a matter of choice, having a weak one too is a matter of choice.

One thing definitely needs to be mentioned here. As I just said, in spite of all the malpractices prevalent in the police services bringing it disrepute, we do know that there are indeed several personnel — both officers as well as constables — who have got into the services with a passion for the job, those who have also experienced pressure and opposition, worked under difficult environment and salary, yet complete their task and job with complete dedication and sense of duty. The valiance of the force during the Mumbai attacks is still fresh in memory. They are few, but they are the one who have kept the hope alive that it is definitely possible to reform the police services if sufficient and honest will is there, and it is definitely possible to bring order and discipline in civic society, however chaotic and bad the present picture might be. Sangliana is one from this category.

It is difficult to explain in proper terms who Sangliana is, and I fear stretching further an already long story. My approach in describing him is a process of elimination where I have written about various inappropriate practices common among police personnel, and now I can proclaim that Sangliana is not like that. This should make you understand the legacy of a policeman who stopped the chief minister for violating traffic signal, lodged an FIR against his own wife for taking his police vehicle for shopping (compare this instance with the event I described at the beginning of this article), used to move around in disguise to check the malpractices in the city, catch youth for traffic violations and gave them long lectures on road safety. In short, the difference between Bangalore and any other city is Sangliana. Three movies have been made on him; why not, after all he is a real hero! As for facing resistance, he was perhaps one ‘who did not know anybody, and did not want to know either’ (sarcasm intended). For further details, please visit the links given at the end of this post.

But surely, and fortunately, Sangliana is not alone. He is not an outlier, instead a group of iron-willed, strong character personnel dedicated to their job with utmost devotion. Working against pressure and opposition is never an easy task, but these bravehearts have stood firm and maintained their positions. Their stance however short, gives up hope and reason to be optimistic. May their strength keeps increasing with each passing day, till the day arrives when moving them from their position becomes as impossible as it was for Lankans to move Angad’s leg. And let us pray for more and more such Angads, who do not fear anybody or anything. It is a distant dream, but not an impossible one.

” . . . what matters there [work done in the world] is not the nature of the work in itself, but the spirit in which it is done. It must be in the spirit of the Gita, without desire, with detachment, without repulsion, but doing it as perfectly as possible, not for the sake of the family or promotion or to please the superiors, but simply because it is the thing that has been given in the hand to do.” — Sri Aurobindo, Letters on Yoga, Volume 2.

7- Jat agitation: It was shameful that police ran from the scene of crime, says probe panel chief, The Indian Express, 14 May 2016.