Ab Tak Chhappan is an important movie in filmography of Nana Patekar. In this movie he is depicted as an honest and tough police officer. The dramatic turn of events and Nana Patekar’s handling of them demonstrate the extent he could go to uphold his values and sense of duty. Given the success of this movie, no one was surprised when its sequel Ab Tak Chhappan 2 was released. In this movie, he was called by the state home minister Vikram Gokhale to ‘clean’ the city of its criminal elements. However, all is not what it seems; Nana Patekar has his moment of disillusionment, and he decides to set things right in his own way. I am not going to write a review of either of these movies. My interest is in a particular scene where Vikram Gokhale tells Nana Patekar how the latter was used for Gokhale’s political ambitions. This scene was a turning point in the movie and built up the climax of Ab Tak Chhappan 2. Watch the following clip (if the video does not play, click on the “Watch on YouTube” link given therein and play the video from 1:16:24 to 1:20:30):

If you have seen enough Indian movies, you must be aware that movie sets depicting government offices show walls decorated by portraits of Gandhi, Nehru, Subhas, Azad, Bhagat Singh, Patel, Ambedkar, Indira Gandhi. You would hardly ever come across any instance of a portrait of a scientist, except Kalam (that too because of his being a President and not for his contributions as a scientist). Ab Tak Chhappan 2 is the only occasion that I have come across which showed two leading physicists of the 20th century. First is Indian physicist Prof. Satyendra Nath Bose, best known for his work which provided foundation of Bose-Einstein statistics. This is the statistics that applies for indistinguishable particles having zero or integral spin. You can ascertain his legacy by the fact that British physicist Paul Dirac named the particles which followed this statistics as Bosons — with a capital B. The other portrait is of Indian American physicist Prof. S. Chandrasekhar, Nobel Prize winner (1983). He worked on various problems like “stellar structure, white dwarfs, stellar dynamics, stochastic process, radiative transfer, the quantum theory of the hydrogen anion, hydrodynamic and hydromagnetic stability, turbulence, equilibrium and the stability of ellipsoidal figures of equilibrium, general relativity, mathematical theory of black holes and theory of colliding gravitational waves” (Source: Wikipedia). And yes, he is the person after whom the Chandrasekhar Limit and the Chandra X-Ray Observatory are named. It is further interesting because if the purpose was only to show scientists, then Einstein and Hawking are much more familiar faces to general audience.

I seriously doubt whether any common Indian knows how the leading Indian scientists looked like, except of course Narlikar and Yash Pal because of their appearance on television. I even doubt how many Indian physicists our society is aware of. You may ask your neighbour if he has heard of anyone by the name E.C.G. Sudarshan or Meghnad Saha. Hence, though Bose and Chandrasekhar are stalwarts in physics and are held in high respect by scientists all over the world, in India their name is not very familiar, leave alone people recognising their faces. Tell me, how many roads or buildings or institutions do you know which commemorate Bose or Chandrashekhar? 1, 2, 3, 4, not more than 10. Compare it with the similar nomenclature after politicians’ names. Political parties do not hesitate to rename even cities after their leaders! 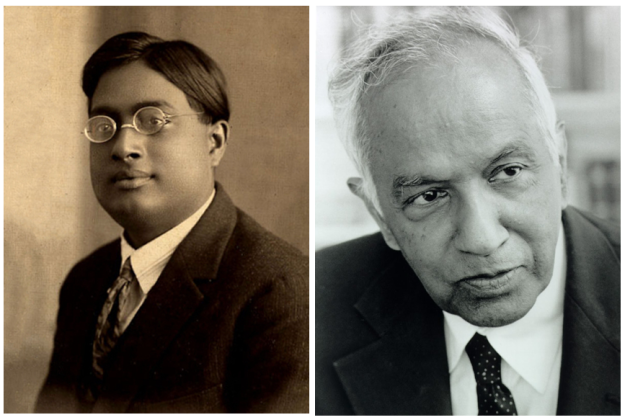 In an earlier post, I had discussed a scene from the movie 15 Park Avenue in which Shabana Azmi played the character of a physics professor. The set depicting her study room had walls decorated with portraits of Einstein.

One reader posed an objection to the portrayal of Shabana Azmi’s room, especially the display of Einstein’s photos. His argument was that scientists rarely put photos of other scientists in their offices; on the contrary, they prefer awards and souvenirs, drawings, family photographs and so on. Though the scene he is referring to and which was the topic of discussion in that post, showed Shabana’s study room in home and not her office, still the argument remains equally valid. On careful consideration of the reader’s argument, I realised that it is indeed so. Though my observation in that post was appreciated, the interpretation was not completely correct. Showing physics books is fine, especially if they constitute reference material. But photos of Einstein? Well. In my own science career spanning nearly two decades, I haven’t ever come across any scientist who has placed a photograph or portrait of any scientist in his office or home, not even Einstein. Yes, indeed, nearly all of them display group photos of some conferences/workshop/symposium, awards, drawings made by their children, sometimes photos of their son/daughter, calendar, and that is all. Some of the professors have very kindly given space to my artworks in their offices. But no photos of any scientist. In libraries, auditorium, committee room, corridors, portraits might be there, but not in scientists’ personal offices. On the other hand, laboratories nearly always display posters brought back from conferences. If such is the scene at the institute, how can we expect them to do differently in their home? In my own home, I have displayed one portrait of Yvonne Catterfeld (earlier there was Jessica Alba), painting by Prof Amitabh Sengupta that he had given me as gift, calendar, white board, clock, book shelf (carrying books on diverse topics and in various languages; science books are there … but those which I never read), and some show-pieces given to me as gift. So the idea in 15 Park Avenue was good, but flawed — considering real world scenario.

Now come back to Ab Tak Chhappan 2. After the previous discussion on 15 Park Avenue, we are already full of skepticism. Again physicists in office? Naayyy! Hey, but wait a minute. The error is more serious here. Read on . . .
If you were attentive enough while watching this scene, then you must have noted that Gokhale had called up Patekar to meet him immediately in City Hospital. In fact, this scene starts with showing a large crowd trying to storm into the hospital entrance. The next shots show Patekar joining Gokhale, and both of them walking together along the corridors of the hospital, with explicit signboards of X-Ray, O.P.D., and the General Ward. Finally they enter the office where this conversation between the two takes place.
Now tell me, what are the portraits of physicists doing in a hospital office? You could argue that it is not a ward or a doctor’s chamber, instead an office — perhaps of the director or dean of the medical institute, or perhaps a room reserved for such VVIPs. If that be the case, it would have been more appropriate if — following ‘the first principle’ of Indian movies — Gandhi, Nehru, Patel, Subhas, Indira were shown. And if out of a blue moon, they wanted to show non-political individuals other than ‘national heroes’, then it would have been more justified if someone from medical profession was given limelight, or at least someone having a  legacy of public welfare. I could name Har Gobind Khorana, Asima Chatterjee, Yellapragada Subbarow, Anandi Gopal Joshi, Prakash Amte, or if nobody else, then Mother Teresa. But why Satyendra Bose and Chandrasekhar?
Let me tell you what might have happened. It is a pure guess, please tell me whether you agree with my argument or not. The sets were being designed. The question arose — how to decorate such large walls, which were perhaps otherwise empty. The director suggested the set designer to put a portrait of some ‘physician’. The set designer told his subordinate to arrange for a portrait of any physician — may be two, for opposite walls. The subordinate went to market, but mixed up the words – ‘physician’ and ‘physicist’, and arranged for the latter, brought them and placed on the walls.
Next, two possibilities could arise. First possibility is that the portraits were peacefully placed, and nobody noticed anything out of place — neither the set designer nor the director. I told you already, in this country nobody recognizes scientists anyway. The shot was taken and the movie released. Bingo!
Or perhaps the director or the set designer did notice it and screamed in terror — “Abey ye kya kiya, ye kisko utha laya?” And then the obvious arguments, shouting and apologies. But what to do now? They could not afford any further delay in shooting; besides,  these portraits must have also cost money, around Rs 2000. Although it is negligibly small compared to the overall budget of 16.5 crore of this movie, but paisa to paisa hai na yaar. Then leave it, let’s manage with these two only. But Sir, what if anyone in audience notices? The director closed his eyes and smiled.

As a physicist myself, I got more and more restless. How is it possible that absolutely nobody noticed this incongruity? There must be someone somewhere to be blamed for this lapse. Though it is not necessary, yet the ideal ‘scapegoats’ must have had familiarity with Physics from their college education. So I picked up the names of all the people involved in the production of this movie and checked their profiles, especially their educational qualifications. I started with actor Vikram Gokhale, then producers Raju Chada and Gopal Dalvi, director Aejaz Gulab, art director Uday Prakash Singh, assistant art director Sachin Dabhade, cinematographer Siddharth More, in that order. However, I was completely disappointed at the negative results. Finally, I arrived at someone noteworthy in screenwriter Nilesh Girkar who had done graduation in Physics from University of Mumbai. I cannot assure you that he is the person who should be held responsible for this error, or at least not noticing it. However, in the absence of any other more plausible candidate, I would prefer putting the blame on him. Nevertheless, I do agree that however incongruous the set may appear, this simple act has introduced a good and welcome change by bringing scientists into limelight. It is indeed the need of the day. It might be a small gesture, which might have in all probability been overlooked by most of the viewers anyway; but in any case it deserves heavy applause.

Note 1: The whole discussion and argument rests on the assumption that the set was designed and arranged by the movie staff. There is a probability that the portraits were already there when the room was procured for shooting purpose. But then, I still feel it to be very unlikely.

Note 2: I came across one Telugu movie which showed portrait of S. Ramanujam in an orphanage. I would share the details with you when I am able to recall it.